Written by Fomo
Updated over a week ago

This article is for users who installed Fomo through the Shopify plugin.

Shopify handles all of billing for plugin users (ex. users who installed via the Shopify App Store).

Here are some common questions about how they handle app charges:

Their billing cycle for Fomo charges is post-dated. This means that your Fomo app charges will hit on the following billing date.

An example
If your Shopify bill comes on the 5th and your Fomo billing cycle ends on the 20th, you'll see Fomo usage charges for May 21st - June 20th on your July 5th Shopify bill.

This also means that if you cancel on June 10th, you'll still see Fomo on your July 5th bill for your May 21st - June 20th usage.

Your Shopify bill should provide the detail for which Fomo billing month is being charged. 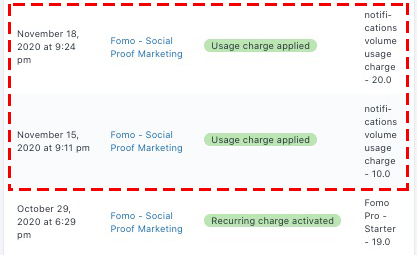 Fomo billing from the Shopify App Store is a bit different due to Shopify's app pricing options.

If you exceed the monthly notification limit on your current plan, you will see "usage charges" on your Shopify bill instead of the next tier plan's name. This is just how Shopify bills for usage-based apps.

Don't want usage-based billing? Use one of these options:

If you have any questions, reach out at hello@fomo.com.

Did this answer your question?